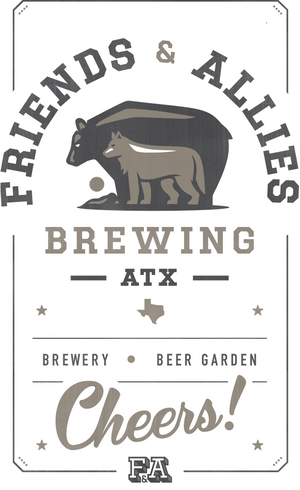 Happy Veterans day! Thank you to all who served and continue to serve. We are forever grateful for your sacrifice. Veterans and their families, come by Friends and Allies for a free beer! #veteransday #america #craftbeer #craftbeeratx #brewery

Come by the brewery today for a little Pickleball action. The boys running it said it was "Pristine Pickleball weather!" @pickleandpints @eastciders_collaboratory #pickleball #craftbeer #craftbeeratx #brewery

Austin's favorite Stout is back! The Bat Wing, a %9 abv wonderful winter drinker will be flowing from the taps at Friends and Allies brewery this Friday November 8th! #batwing #batwingsbackalright #stout #backstreetboys #craftbeer #craftbeeratx #brewery #brewing

Join us tomorrow night for Beer & Big Dogs: APA! After Dark Experience! Tickets include beer from Friends and Allies Brewing & Blue Owl Brewing plus a special big dog show. Get yours now: https://www.eventbrite.com/e/beer-and-big-dogs-an-apa-after-dark-experience-tickets-77911751145

A sneak peak of our beer dinner with Jameson Irish Whiskey at Oasthouse Kitchen + Bar tomorrow!

Thank you to all of the artists who joined us today to send off some of our Hibernia barrels in style!! @jameson_us #hibernia #barrelagedbeer

Have a great holiday weekend everybody! This awesome dog was poached in our Fresh Coast IPA and then finished on the grill! Thanks @diegodiegodiego1 ! . . . . . . #murica #4thofjuly #beerporn #craftbeer

Happy 4th of July, y'all! Open 2-8pm, with $3 Bravery Red IPA all day! Feel Free to park here and take a bike, scooter or ride share the short 4 miles to downtown for the fireworks!

Everybody have a safe 4th of July! We will have special hours, 2-8pm, and we are just 4 short miles away from the fireworks at Auditorium Shores a perfect place to park and catch abike share or scooter to the show! Our back parking lot is always open!

The @woombikesusa usa kids course is set up today at the brewery! Demo bikes for kids from 18mos t in 12 years old! @ Friends and Allies Brewing

This Sunday, treat dad to the #FathersDay Bikes & Beers ride, presented by @hollandracing ! Entry includes @FriendsandAlliesBrewing beers, @nuunhydration @honeystinger energy, @whollycowatx lunch, support from @MellowJohnnys and a kid's course from @woombikesusa for after the ride! Ticket link in profile!

HUGE NEWS: Beer-To-Go & TABC Sunset have passed the Texas Senate! We will issue a full press release tomorrow AM, but in the meantime, we want to take this moment to thank the craft beer community across Texas. This victory belongs to the thousands of you who have fought so hard for this moment. We also want to say a big thank you to Senator Dawn Buckingham our Beer-To-Go Senate champion, as well as Senator Brian Birdwell for his months of hard work on the Sunset bill, conducting an evenhanded stakeholder process that brought the whole industry to consensus on Sunset & Beer-To-Go! This legislation will represent the most comprehensive, positive reform to the Texas Alcoholic Beverage Code in a generation, serving the entire industry from the brewer down to the consumer. With this victory, we’ll become the final state in the country to legalize Beer-To-Go sales from manufacturing craft breweries and take a giant step forward in the fight to #FixTexasBeerLaws.

Great news!! Beer to go passes the Senate and is on to the governors desk. Thank you to all of the members of this community who reached out in support, and a special thanks to Charles, Caroline, Adam, Jim and countless others who put in years of sweat to make this happen.

Friends and Allies Brewing May 23

April Flowers have (finally) brought our May Flowers! Two years in the making, our Star Jasmine trellis has finally filled out and smelling beautiful! Totally #instaworthy get your pics before summer rolls in. . . . . . #atxlife #atx #austintx #atxbeer #atxbeers #beerporn @ Friends and Allies Brewing

Friends and Allies Brewing May 19

May is #bikemonth at the brewery! Always $1 off if you ride instead of drive, @biketexas is raffling off an @eprodigybikes "Magic" eBike, watch the @giroditalia in the taproom courtesy of @flobikes and head to the @drivewayseries on May 30th for Friends and Allies beer and to cheer on @phenomcycleclub @ Friends and Allies Brewing

Friends and Allies Brewing May 17

Friends and Allies Brewing May 16

It's time to take action on Beer-To-Go in the Senate and we've got a new tool that makes it easier than ever!

If you love Friends and Allies beer and would like to be able to by seasonals, six packs, and special releases to go at the taproom PLEASE SHARE AND CLICK this link to send a quick email to your Senator. Texas is the only state in the nation that does not allow these sales but we are on the verge of changing that!! A few clicks will do it!! So please, for us and all of the other local breweries out there that you love.... fire off that email

Friends and Allies Brewing May 6